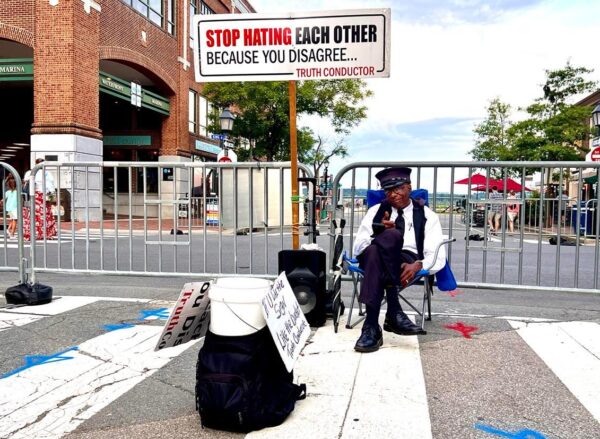 In case you missed it, the Truth Conductor was recently in Old Town.

Sitting in his conductor’s uniform behind a donation bucket, Don Folden sat on a recent workday in the 100 block of King Street collecting donations under a sign reading, “STOP HATING EACH OTHER BECAUSE YOU DISAGREE.”

Folden has become a regular fixture in Old Town in recent days, sitting for hours and collecting donations to keep preaching his message in the pedestrian-only area of King Street.

“If we don’t stop talking at each other, and start talking to each other, nothing is gonna change,” Folden said. “You got parents right now living under the same roof, sleeping in separate rooms and raising dysfunctional kids, and they’ll turn around and tell you they don’t hate nobody.”

You might’ve seen Folden espousing peace at a number of protests in recent years, whether in front of the White House or Supreme Court. He doesn’t takes sides, necessarily, which has sparked controversy, such as being seen holding his sign outside in the background of former Trump administration advisor Steve Bannon’s courthouse appearances.

Folden was frustrated when he spoke with ALXnow that his donation bucket was mostly empty.

“As bad as the country is, people have a problem encouraging me to be positive,” he said. “They want me to sit here for nothing. If they give me $1, of course it’s gonna benefit me. It’s my idea, and if we want change we got to be the change. We can’t wait for it to happen. And this is what I’m trying to get people to see — y’all walking by me like this change is gonna happen on his own. No, man, if you don’t get involved, if you don’t participate, if you don’t promote something how is it going to happen?”

According to his Facebook page, Bolden was in Alexandria numerous times last month, and at least once in July.

Folden, who runs DCBlackTours.com, has been a tour guide in Washington, D.C. for decades. He started as the Truth Conductor about four years ago, he says, and made an appearance calling for calm during Black Lives Matter protests in front of the White House under former President Donald Trump. He claims to be apolitical, but also recently posted an anti-gay marriage message on his Facebook page, while at the same time calling for indictments in the wake of the Jan. 6 Committee hearings on Capitol Hill.

“I come here (to Old Town) quite often,” Folden said. “I haven’t been here in a few days because I was at the White House, but I try to get here all the time.”