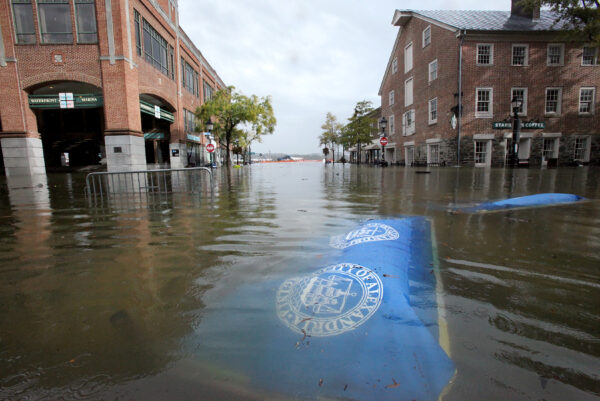 The city of Alexandria is getting ready to drop $102 million to fix flooding along the waterfront.

“This scenario has an estimated cost of approximately $102 million, consistent with the CIP funding allocated to Waterfront Small Area Plan implementation,” the draft plan said. “According to City staff, estimated costs are accurate at the level of detail appropriate for this stage in the planning process. Affordability will continue to be evaluated during the design-development process as construction and material costs continue to escalate in excess of historic average rates typically used to account for inflation.”

The cost is scaled back from earlier plans with cost estimates ranging from $170 million to $215 million.

The plan indicated areas where costs were cut, like using a cost-effective paving material in the streetscape improvements, but other bigger costs were averted by shifting the focus from ideal improvements to restoring the existing waterfront bulkheads.

This would maintain the existing bulkhead rather than replacing or encapsulating it in its entirety. This approach will provide the intended level of flood protection at a reduced capital cost. Both staff and the committee acknowledge that deferred investments in eventual bulkhead replacement will still be required, and not precluded, by this approach.

The plan also notes that some of the improvements cut back in the plan should still be pursued in later budgets:

CIP funds allocated by City Council to Waterfront Small Area Plan implementation were originally intended to complete a full slate of waterfront capital projects, including parks and flood mitigation improvements. Given recent changes in program scope and high capital cost escalation, the budget is no longer sufficient to accomplish all anticipated elements. The committee recommends that additional budget be reserved in future year CIPs to finish parks as envisioned in the plan, or that alternate revenue streams be adopted to fund park and public space improvements. In addition, the City should continue to proactively pursue funding from federal and state grant programs, private philanthropy, and other sources to fund improvements that realize the City’s vision for the waterfront.

The document said that, where possible, the plan has built-in options for future investments. In other cases, like at Waterfront Park, future improvements could cost more in the long-term as a result of having to redo parts of the park.