(Updated at 11 a.m.) West End residents are fuming over Wesley Housing’s plan to expand a 14-story 1970s-era apartment building into a three-building affordable apartment complex. Plans for the ParcView II complex at 5380 Holmes Run Parkway would add hundreds of affordable units to Alexandria’s West End, and City Council will consider them on Saturday (Feb. 12).

Wesley Housing owns the property and is managing its redevelopment, and wants to redevelop the 14-story building with 146 affordable units and build two new nine-story apartment buildings with 227 affordable units on a three acre lot.

“(T)he construction of these two high-rise buildings will require the driving of heavy piles, jackhammering and dump trucks almost daily for close to two years, sending loud noise and vibrations throughout the neighborhood,” the petition says. ” We must not unleash the destabilizing effects of this pile driving on the many buildings in the neighborhood that are over 45 years old. I don’t want a Surfside building collapse to happen here in Alexandria!”

The Planning Commission approved of the project unanimously on Feb. 1 despite dozens of letters in opposition.

“The impact of this project on the narrow Holmes Run Parkway will be catastrophic,” wrote an Old Town resident. “Adding the vehicles of more than 220 new residents to this neighborhood is a recipe for disaster. The asphalt surface already suffers from its current heavy use with crumbling edges and potholes next to the green space bordering the run. The traffic of construction vehicles will add an additional strain to this area’s limited roadway system.”

A multimodal transportation study found that the proposed development would not “have a detrimental impact to the surrounding transportation and roadway network, assuming that all planned site design elements and recommended transportation demand management measures are implemented.” 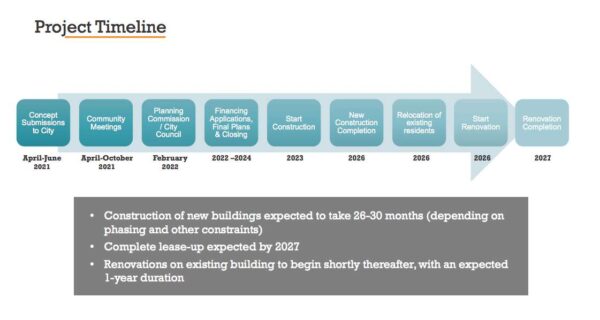 The project would have an impact on Alexandria City Public Schools, since it is within the Patrick Henry K-8 School, Francis C. Hammond Middle School, and Alexandria City High School attendance areas. Each of these schools is over capacity.

“However, the Minnie Howard Campus of the High School is expected to open in 2024, which is at least two years before new students from ParcView II will start enrolling in ACPS,” staff said in a report.

The plan was first presented to the community in April 2021, seven months after Wesley Housing received a $400,000 loan from the City’s Housing Trust Fund for preliminary design and engineering work. As part of the deal, Wesley Housing would give the city a half-acre of land along Holmes Run Parkway and $40,000 for a Capital Bikeshare station.

Mayor Justin Wilson listed the project in his monthly newsletter, and said that Alexandria will “continue to seek creative partnerships, new land-use tools and innovative financing to preserve and create affordability in our City.”

The project would be completed in four phases.

Wesley Housing says that 267 units would be available for residents making 60% of the area median income (AMI) and 69 units for residents making 40% AMI. Additionally, 8,000 square feet of ground floor retail space would be reserved for a daycare facility ine one of the new buildings, as well as a community center .

“The 373 units will be committed as affordable housing for a minimum of 40 years,” notes a city staff report. “In addition to increasing the overall number of affordable units, Buildings B and C propose to introduce larger family-size (three-bedroom) units in the community. Further, at least 5% of the units will be accessible to people with mobility impairments.”

Wesley Housing bought the property in 2006, and received a $9 million loan from Alexandria to make renovations. It is located 1.2 miles from the Van Dorn Street Metro station, and within a quarter mile of 16 MetroBus and DASH bus stops.