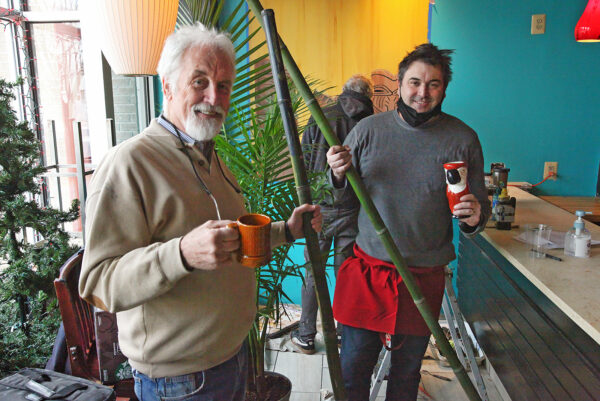 Ready for a Mangorita? Tiki, a new pop-up bar will open next week at 2312 Mount Vernon Avenue.

The former longtime home to The Sushi Bar was briefly converted into the Christmas-themed pop-up bar Joy On The Avenue, and more pop-ups at the location are being planned as plans for the final concept fall into place. For now, bamboo decorations are being put in place and Tiki masks have been painted on the walls.

Next month, Homegrown Restaurant Group owners Mike Anderson and Bill Blackburn will transform Tiki into the Valentine’s themed “Love Shack” pop-up next month, followed by a yet-to-be-named Mardis Gras pop-up after that.

Anderson owned Mango Mike’s for 18 years on the West End.

“It’s about creating an experience, an escape,” Anderson said. “People need a bright spot in their day, and haven’t been able to take vacations. We’re giving them a vacation on the avenue.”

Blackburn says HRG is ironing out a permanent fast-casual concept for the space, which he hopes to unveil in the spring.