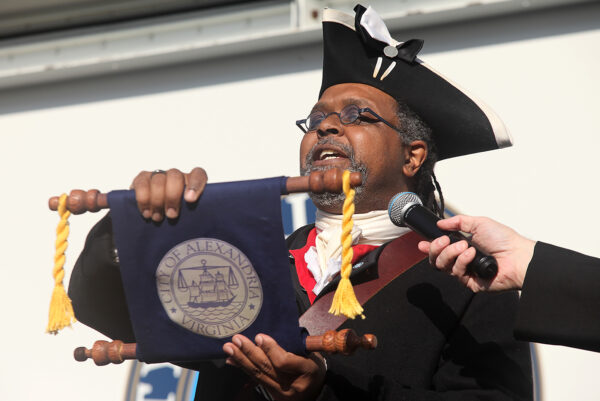 Alexandria Town Crier Ben Fiore-Walker was largely silent during the pandemic. Now he’s back, bell and call and all.

Earlier this month, Fiore-Walker stood at the reviewing stand in his Colonial uniform and opened the Campagna Center’s Scottish Christmas Walk Parade in Old Town. While he’s spoken at numerous online events and small outdoor concerts over the past year, the Scottish Christmas Walk was his first large public gathering since he previously walked through Old Town ringing his bell and declaring, “Hear ye! Hear ye!” at the George Washington Birthday Parade in February 2020.

“It never gets old,” Fiore-Walker told ALXnow. “The common element in all of the events and parades is seeing happy Alexandrians and visitors. For me, it’s about seeing the city so happy. The kids, of course, they think I’m a pirate, but that’s to be expected.”

The 53-year-old Fiore-Walker has created hundreds of cries since he started the job 10 years ago. There was a lot of competition, too, and he beat out 11 other candidates for the position in a “cry-off“. He is the city’s fourth town crier since 1976, and took over after his predecessor William North-Rudin moved away.

Town criers go all the way back to ancient Greece. For thousands of years, people with booming voices and commanding presences educated mostly illiterate populaces with the latest official word on tax increases, the news of the day or public executions. For Fiore-Walker, it means two-to-three monthly events to emcee, or open. It’s a volunteer position, and he has his own uniforms. At private events, he says, the hosts will usually buy him dinner and pay a $150 honorarium to help pay for dry cleaning and gas.

“It’s given me an outlet that is different than my day-to-day,” he said.

Married with two children, Fiore-Walker has lived in Alexandria since 2002. He’s a doctor of neuroscience, and his career includes stints as the associate dean of diversity and inclusion at Georgetown University, the manager of diversity programs with the American Chemical Society and as a senior director at Teach For America. He recently started work as the senior director of the Opportunity & Inclusion Center for the Council for the Advancement and Support of Education, although his coworkers aren’t yet aware of his other identity.

“I don’t think it’s come out yet,” he said. “Usually it comes out when when you’re meeting people and you say something about yourself that nobody else would know. That’s usually the thing I lead with.” 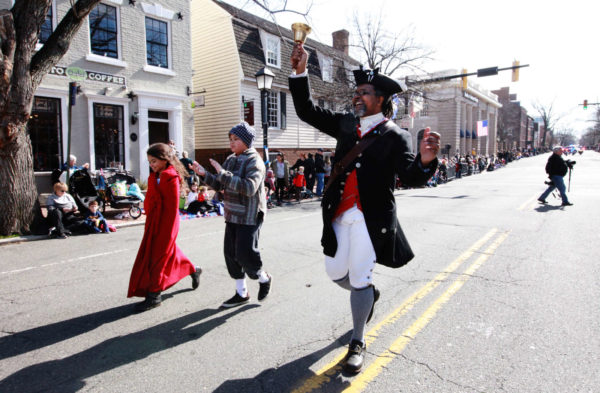 A metamorphosis occurs when Fiore-Walker puts on the uniform.

“I am no longer Ben,” he said. “I am the town crier for the City of Alexandria. That means that the town crier always uses his turn signals to change lanes, but Ben might not. The town crier doesn’t go shopping in the supermarket, but Ben does. I’m always mindful when I’m wearing the uniform that I’m not me. I’m representing the city. I don’t do things that would bring negative attention to the city.”

That schism has become the subject of jokes within Fiore-Walker’s family.

Fiore-Walker has no plans to hang up his bell anytime soon. He says the job is too much fun, and he’s also honed stellar vocal cords.

Fiore-Walker’s next performance will be at Market Square for the opening of the First Night celebration on New Year’s Eve.