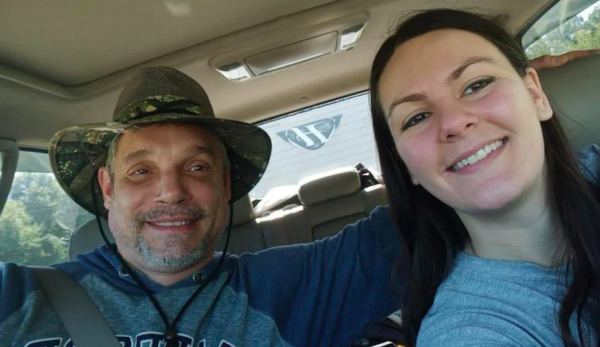 They actually did it.

Somewhere between the barbecue ribs and brisket, manager Jim Miller and bartender Sandra Russell fell in love working at Pork Barrel BBQ in Del Ray. Over the summer, they formed an idea to leave it all behind and spend a year driving around the country with a 21-foot Keystone Hideout camper in tow.

On September 20, Miller and Russell pulled up stakes and left Alexandria.

ALXnow caught up with the couple at a laundromat in Swansboro, North Carolina, about 10 miles from their latest campground. They’re documenting their experience in a public Facebook group, and at every new stop are sending back postcards to Pork Barrel.

“I’m telling you that life hasn’t been this good for a long, long time,” Miller said over the phone. “We live in 186-square-feet of space. That includes a queen-sized bed, two bunk beds, a toilet, a shower, a double gas burner stove, refrigerator, and an air conditioner and heater. ”

For Miller, a 1988 graduate of T.C. Williams High School, and father of three grown children, the experience is liberating. Russell, who grew up in a military family, is used to traveling around the world. The couple met after Russell started work at the Del Ray restaurant a year-and-a-half ago.

“We needed a change of pace, and I’ve never really seen too much of this great country that we live in,” Miller said. “We felt like our lives were just going around one of those hamster wheels.”

Russell said she’s loving the experience, even though they had to find a new mattress.

“I was a little bit sore in the beginning,” she said. “The mattress wasn’t all that comfortable, but I’m young. I can do it right now, before kids, before starting a career and all that.”

“We miss them both right now,” Blackburn said. “Jim and Sandra were both a lot of fun to work with.”

Miller says the plan is to spend Thanksgiving back in Alexandria and Christmas in Palm Springs, California.

“We’re thinking about trying to do this for a full 12 months and then find a place out of all of our travels where we find the most peace and serenity and the most opportunity for us to live good, peaceful lives around good people,” he said.

END_OF_DOCUMENT_TOKEN_TO_BE_REPLACED

More Stories
Just Listed in AlexandriaPoll: What do you think of the proposed Duke Street traffic change?