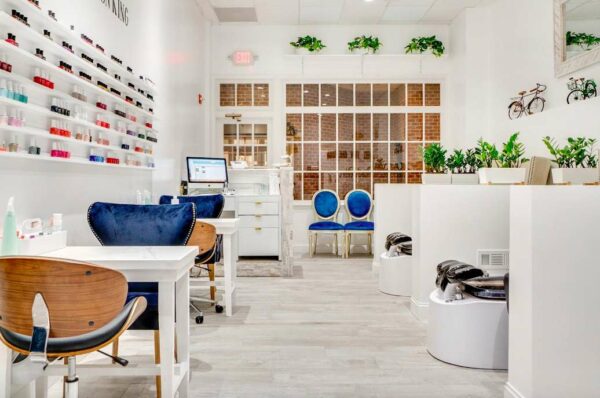 Salon Meraki’s founding location at 1101 Queen Street will quadruple in size when it expands into a neighboring space this fall.

Kathleen Le opened her 900 square-foot nail salon on November 1, 2017, and hopes to keep the tradition alive with a November 1 opening at 300 N. Henry Street, which was previously occupied by ARC Document Solutions. She also owns a second salon at 320 King Street.

“Ever since I opened my salon, I always dreamed of expanding it to a bigger space,” Le told ALXnow. “Finally that opportunity came when the printing company moved out.”

The move will expand Le’s footprint to about 3,600 square feet at the corner of Queen and N. Henry Streets in Old Town. That means expanding to 19 pedicure chairs (up from six) and hiring new staff. Le will train employees without experience and prep them to take the State Board test to become certified nail technicians.

“The address has the numbers 1101, and I want to keep the November 1 tradition alive,” Le said. “If that doesn’t happen I do hope to open at around Christmas at the latest.”

After emigrating from Vietnam to the area in the mid-1990s with her family, Le embarked on a 25-year career as a nail technician before opening her own brick and mortar.

“We don’t treat clients like number,” Le said. “Most people say that all they really wanted was an escape. They spend 45 minutes or an hour with us, and we make them feel like a million bucks.”

Staff and clients at Salon Meraki wear face masks at all times, and clients are given a temperature check upon entry.