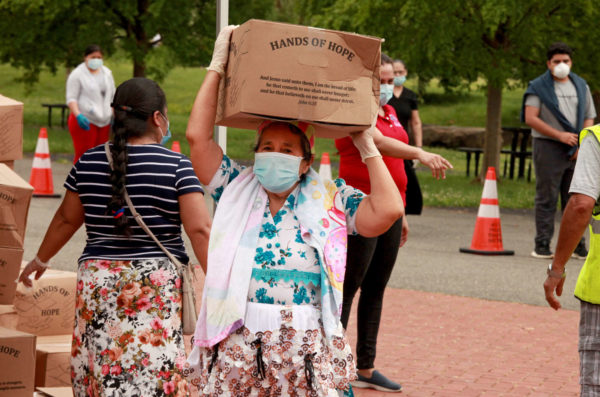 Landmark Towers has a problem.

The City of Alexandria also has a problem: its bleeding market rate affordable housing faster than committed affordable units — units with rents capped below market price — can be made to keep up with demand.

The two bodies came to an agreement last year for a loan that — like the old Reese’s ad — took each party’s problems and turned them into each other’s solutions. Now, the city is looking to that West End partnership as one potential solution to help stave off impending gentrification of Arlandria when Amazon comes to town.

At a City Council meeting on Tuesday, city staff said the earlier Landmark Towers agreement could act as a template for partnerships in Arlandria, where there are similar market rate residential developments that could be in need of extensive overhauls. Today, city staff said the majority of market rate units in the area are affordable at 60-80 percent of area median income (AMI).

According to the Alexandria Housing Affordability Advisory Committee (AHAAC), the loan would help pay for capital improvements in exchange for adherence to adhering to certain rent guidelines and other stipulations.

Provision of a $2.5 million capital improvement loan to Landmark Towers, LLC, a 154-unit mixed-use rental property in exchange for long term compliance with the City’s voluntary rent guidelines, provision of a right of first refusal in the event of a future sale, and a commitment to jointly explore potential redevelopment opportunities, if mutually beneficial, to add committed affordable and workforce units.

The AHAAC said in its report that market rate affordable units are part of a decreasing supply. The recommendation also said that the loan was the first of its kind: a housing opportunity loan to a privately-owned entity, but that doing so was consistent with the city’s housing and community development powers. It’s a shift that could blur the lines between committed affordable and market rate affordable units moving forward.

“The importance of this residential asset to Alexandria’s housing affordability ecosystem,” the report said, “the property’s many long term tenants, its locational and transit efficiency, as well as its capacity for potential additional development, combined with the owner’s desire to collaborate with the City on a mutually agreeable solution that maintains the property as market rate affordable and workforce housing, has induced the parties to come up with a package that offers short, medium and long term benefits.”

It’s a solution that was raised among others at the City Council meeting to discuss ongoing plans to try to preserve not only affordable housing in Arlandria, but the predominately Hispanic and immigrant communities that have called the area home for several decades.

Jovovic said other aspects of the plan will include making sure that Arlandria residents are the ones who benefit most from new affordable housing, with the city developing a system that would prioritize existing residents of the neighborhood when new units come online in the area. Jovovic said the city is also working on making the housing application process less intimidating, which can be dense and hard to decipher even to native English speakers.

City Council member Canek Aguirre said he was excited about the plan and credited the city’s partnerships with local community organizations in helping with outreach.

“I’m excited about this project and the level of outreach — even in the pandemic — and the Spanish-first approach to ensure the demographic areas are reached out to,” Aguirre said. “It’s a testament to the importance of our relationship to organizations like Casa Chirilagua and Tenants and Workers United.”