(Updated 10:10 a.m.) If you’ve ever been frustrated by huge trucks taking up parking in business areas, a new city ordinance (item 19) should put you at ease.

A new city ordinance limits the ability of large trucks to park in Alexandria’s commercial business areas to a two-hour window unless they’re loading and unloading.

Limit parking of vehicles over 12,000 pounds or longer than 30 feet to 2-hours in commercial business areas unless actively loading or unloading

The new ordinance was approved in an auction-speed lightning round of approvals at the weary end of a nearly seven-hour City Council meeting on Saturday, March 13.

A survey of those affected by the ordinance found widespread approval — around 90% — from workers, those most likely to need to park near businesses. Unsurprisingly most opposition to the ordinance was from heavy vehicle drivers, but even that was split 40/40/20 between those in favor of the ordinance, those opposed, and those who were neutral on the issue.

A map of the zoning districts around Alexandria shows that the commercial business areas — marked in red — are mainly centered in Del Ray and Old Town, with a handful scattered across the West End. 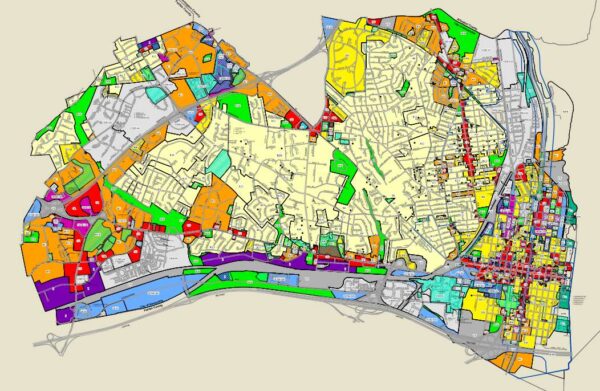