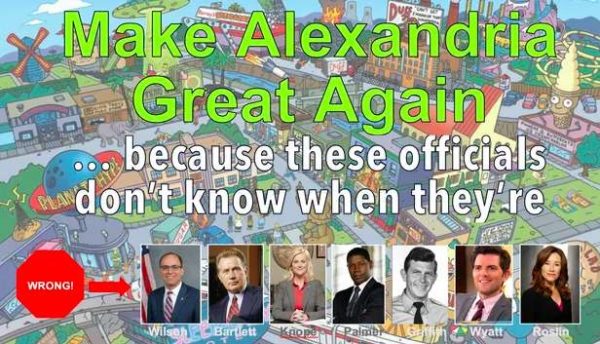 The 2,233-member strong Bring Integrity Back to Alexandria (BIBA) Facebook page has become a prominent forum for criticism against local government but has found itself the object of some backlash and now: parody.

A blog launched this weekend, Make Alexandria Great Again, includes a handful of posts lampooning common topics in the group, like frequent criticism of Mayor Justin Wilson, opposition to added density, and nostalgia for the city’s past.

“What happened to this city,” said one blog post, titled ‘I Used to Be Able to Buy a Hamburger in This City for A Nickel’. “Used to be, a man could walk around with some change in his pocket and live like a king. A nickel! I used to put a nickel down on the counter and the man would give me a hamburger!”

The BIBA group started in 2018 focused on opposition to new bike lanes on Seminary Road but the group has since expanded into other issues, like criticism of city’s plans to restore Taylor Run.

The page features a banner image with various people on the City Council or in city administration that are frequent targets for critique from the group. The parody site features a similar image, but with Mayor Justin Wilson alongside characters from Parks and Recreation, West Wing, the Andy Griffith Show, 24, and the Battlestar Galactica reboot.

The page even includes a cameo parody of ALXnow: “ALXToday”