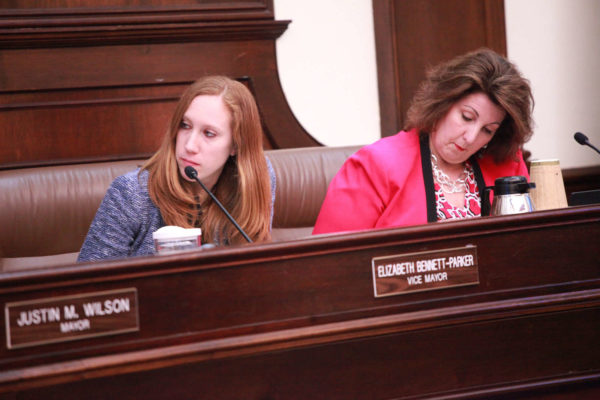 As the city continues to adapt to primarily virtual meetings, Vice Mayor Elizabeth Bennett-Parker is spearheading an effort to open up new ways for the public to provide input on city affairs.

While the move coincides with the extended online-only year of city governance, Bennett-Parker said the issue also taps into earlier lack of online access for city residents.

“While residents can watch our meetings on channel 70, stream our meetings online, and access recordings afterwards, they did not have a way to truly participate online until we moved our meetings to Zoom in response to COVID-19,” Bennett-Parker said in a message to the City Council. “This memo seeks to build upon this experience and sustain it once we return to in-person meetings, recognizing that requiring in-person attendance creates barriers to participation.”

Bennett-Parker noted in the memo that in some ways, the city is restricted by the Code of Virginia. Section 2.2-3708.2 outlines specific requirements for virtual engagement, but Bennett-Parker noted in her memo that the code section specifically states that the section should not be construed to “prohibit use of interactive audio or video means to expand public participation.”

“Our ability to expand options for public comment via the use of video and audio means is thus a question of policy and resources.,” Bennett-Parker said. “With the agreement of my colleagues, I would like to ask staff to return to Council with information regarding what resources would be needed to expand our ability to receive public comment at Council meetings…”

Bennett-Parker requested that the staff look into accepting the following forms of public input:

Eventually, Bennett-Parker said other boards and commissions could adopt a similar standard.

“While this initiative, if ultimately approved, would start with Council, it would be my hope that it could be expanded to the Planning Commission and other Boards and Commissions that receive public comment,” Bennett-Parker said.

Bennett-Parker’s memo is scheduled for review by the City Council at the meeting tonight.

A Washington, D.C. man is behind bars after allegedly stealing a car from a lot in an industrial area of the city and fleeing from police. The incident occurred shortly…

Fall Arrives at MGM National Harbor — “The casino and resort is celebrating autumn with the flavors, florals and magic of the season.” [Alexandria Living Magazine] It’s Tuesday — Partly cloudy…