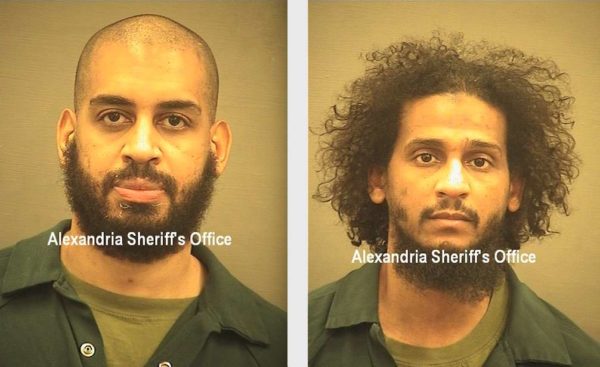 The Alexandria Sheriff’s Office on Thursday confirmed that suspected ISIS terrorists Alexanda Amon Kotey and El Shafee Elsheikh are being held in the city jail.

The former British citizens are accused of conspiring to kidnap and kill U.S. and western hostages between 2012 and 2015, including Americans Jim Foley, Steven Sotloff, Peter Kassig and Kayla Mueller. The British government reportedly allowed their extradition after the U.S. Justice Department agreed not to seek the death penalty.

Kotey, 36, and Elsheikh, 32, have British accents are accused of being members of the infamous ISIS group known as “The Beatles”.

“Alexanda Amon Kotey and El Shafee Elsheikh were placed into our custody this afternoon by the U.S. Marshals and are being held at the Alexandria Adult Detention Center,” said Captain Sean Casey of the Alexandria Sheriff’s Office.

The Justice Department announced Wednesday that the pair made their initial appearances at the Eastern District of Virginia federal courthouse in Alexandria.

Other notable figures who have spent time in the Alexandria jail include Zacarias Moussaoui, a conspirator in the 9/11 terror attacks, and former Taliban fighter John Walker Lindh.

See the full release from the Justice Department below the jump.

Two militant fighters for the Islamic State of Iraq and al-Sham (ISIS), a foreign terrorist organization, are expected to arrive in the United States today in FBI custody on charges related to their participation in a brutal hostage-taking scheme that resulted in the deaths of four American citizens, as well as the deaths of British and Japanese nationals, in Syria.

“These charges are the product of many years of hard work in pursuit of justice for our citizens slain by ISIS.  Although we cannot bring them back, we can and will seek justice for them, their families, and for all Americans,” said Attorney General William P. Barr. “Our message to other terrorists around the world is this — if you harm Americans, you will face American arms on the battlefield or American law in our courtrooms. Either way, you will be pursued to the ends of the earth until justice is done.”

“Today, we remember the victims, Jim Foley, Steven Sotloff, Peter Kassig, and Kayla Mueller, and their families who are forever affected by these senseless acts of violence,” said FBI Director Christopher Wray. “These families have suffered with the painful loss of their loved ones at the hands of brutal killers; today’s charges demonstrate the FBI’s dedication and commitment to giving them the justice they deserve.  We, along with our partners in the U.S. Government, remain steadfast in our duty to bring to justice those who have harmed our citizens — no matter where they are, and no matter how long it takes. I’m grateful to the men and women of the FBI, the victims’ families, and our domestic and international partners, for their tireless efforts to bring us to where we stand today with the prosecution of these men on U.S. soil.”

According to allegations in the indictment, from 2012 to 2015, Kotey, Elsheikh, Mohamed Emwazi (deceased), and a fourth British citizen (CC-1) currently incarcerated in Turkey, were ISIS fighters and participated in the abduction of American and European hostages in Syria. The men also allegedly engaged in a prolonged pattern of physical and psychological violence against the hostages, including against American citizens James Wright Foley, Kayla Jean Mueller, Steven Joel Sotloff, and Peter Edward Kassig. Due to their English accents and their history together in the United Kingdom, the four men were often referred to by hostages as “The Beatles”.

“Kotey and Elsheikh are alleged to have committed horrific crimes in support of ISIS, including hostage taking resulting in the deaths of four American citizens,” said G. Zachary Terwilliger, U.S. Attorney for the Eastern District of Virginia. “Their alleged acts have shattered the lives of four American families. What each these families have sought more than anything else is for these defendants to have their day in court. Well, that day has come. While we cannot return their loved ones or undo the pain that these families face each day, we can do everything possible to ensure that the defendants are held accountable for their alleged savage actions.”

According to allegations in the indictment, Kotey, Elsheikh, and Emwazi, worked closely with Abu Muhammed al-Adnani, a former leading ISIS commander and chief media spokesperson. Until he was killed in a United States military airstrike in August 2016, Adnani reported directly to Abu Bakr al-Baghdadi, the former self-proclaimed leader of ISIS. Baghdadi was killed during a United States military operation in Syria in October 2019.

“The indictments of Alexanda Kotey and Elshafee Elsheikh are the result of more than eight years of tireless work by the FBI Washington Field Office and personnel across the U.S. Government and the international law enforcement community,” said Acting Assistant Director in Charge James A. Dawson, FBI Washington Field Office. “These individuals allegedly conducted a litany of heinous and barbaric crimes as part of their duties as members of ISIS and for too long, the families of their victims have suffered while awaiting the day they would finally see justice for their loved ones. The men and women of the FBI remain dedicated to bringing the full force of the US justice system upon those who harm our citizens in furtherance of terrorism.”

Kotey, Elsheikh, and Emwazi met repeatedly with Adnani concerning the hostage-taking scheme and other matters. Between November 2012 and February 2015, Kotey, Elsheikh, Emwazi, and other ISIS fighters committed acts inflicting pain, suffering, cruelty and mistreatment on American, British, and other hostages in captivity.

Throughout the captivity of the American hostages and others, Kotey, Elsheikh, and Emwazi allegedly supervised detention facilities holding hostages and were responsible for transferring hostages between detention facilities, in addition to engaging in a prolonged pattern of physical and psychological violence against hostages. From November 2013 to February 2015, Kotey and Elsheikh allegedly coordinated the Western-hostage ransom negotiations conducted by email. Kotey and Elsheikh knew and understood that the release of American and other hostages was conditioned on the transfer of large sums of money or concessions from the United States government, such as the release of Muslim prisoners.

According to allegations in the indictment, on or about April 25, 2014, Kotey, Elsheikh, and Emwazi forcibly moved the Italian, Danish, and German citizens, along with two other European humanitarian aid workers, to an isolated area approximately two miles from their prison to witness the execution of a Syrian prisoner. Kotey and Elsheikh knew and understood this execution was part of the hostage negotiation process. Emwazi executed the Syrian prisoner by shooting him in the back of the head and then numerous times in the torso as he fell into a grave. Kotey instructed the hostages to kneel at the side of the grave and witness the execution while holding handmade signs pleading for their release. Elsheikh videotaped the execution of the Syrian hostage, and after the execution the three men returned the European hostages to the prison with Elsheikh telling one hostage, “You’re next, [First name].”

Kotey and Elsheikh were captured together in January 2018 by the Syrian Democratic Forces as they attempted to escape Syria for Turkey. Emwazi was killed in a United States military airstrike conducted in November 2015 in Syria.

James Wright Foley – In November 2012, Kotey, Elsheikh, Emwazi, and other ISIS fighters forcibly seized and detained Foley, a citizen of both the United States and the United Kingdom. On or about Aug. 19, 2014, ISIS’s media center released a video depicting Emwazi beheading Foley.

Kayla Jean Mueller – In August 2013, ISIS fighters forcibly seized and detained Mueller in Syria. Beginning in or about October 2014, Baghdadi sexually abused Mueller against her will while she was held captive in Syria. On or about Feb. 7, 2015, Mueller’s family received an email from ISIS fighters confirming Mueller’s death in Syria.

Peter Edward Kassig – In October 2013, ISIS fighters forcibly seized and detained Kassig in Syria. On or about Nov. 16, 2014, ISIS’s media center released a video depicting the decapitated head of Kassig.

The Department of Justice expresses its profound appreciation to the United Kingdom government as well as the Syrian Democratic Forces for their dedicated commitment to assist the United States in seeking justice for all the victims of the alleged crimes.

This case is being investigated by the FBI’s Washington Field Office. The Justice Department’s National Security Division and Office of International Affairs provided valuable assistance.

An indictment is merely an accusation. All defendants are presumed innocent until proven guilty.