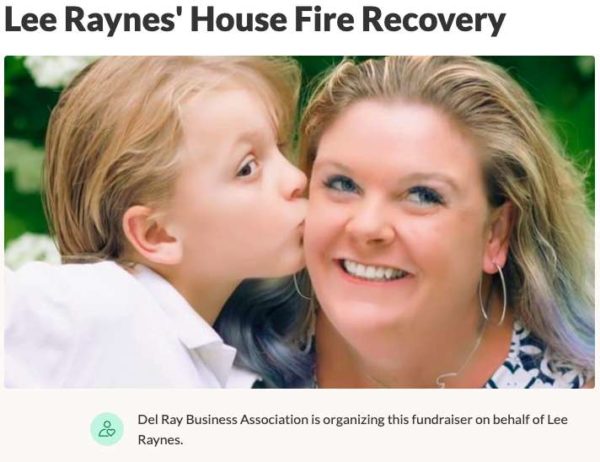 Lee Raynes has been humbled by community support after her Del Ray home burned down on Saturday, September 12.

At around 7 p.m., Raynes, who owns Bellies and Babies Consignment Boutique on Mount Vernon Avenue, was on her front porch when she smelled smoke. At first she thought it was her dinner burning in the oven, but knew it was more serious after opening the front door of her house.

“The fire marshal told me that it was my drier in the basement, which wasn’t even on,” Raynes told ALXnow. “The biggest problem is that the structural integrity of the house is compromised, because the cross beams on the main level are charred. It looks like I will have to tear down to foundation and rebuild.”

Raynes’ 10-year-old son was not home at the time, and their 16-year-old cat died in the fire.

Within 48 hours, the Del Ray Business Association organized a GoFundMe campaign for Raynes that has since raised more than $11,000.

“Thankfully, Lee and her 10-year-old son are both safe,” the DRBA said. “However, Lee left the house with only the clothes on her back; the family lost their cat in the fire; and their home suffered significant damage in the floorboards on the main level and smoke damage on the third floor… We are in awe of Lee’s constant upbeat attitude despite everything 2020 has thrown at her.”

“This community raised $10,000 in less than 12 hours, and I don’t even know 75% of people on that list,” she said. “It’s been very humbling. I started my store to help the community and to feel like they have a village, and it’s me who’s now thriving from the village.”

NOTIFICATION :: The 2600 block of Randolph Avenue and cross streets are closed due to a structure fire. Please avoid the area and watch for police direction. Expect police and fire personnel in the area. @AlexandriaVAFD