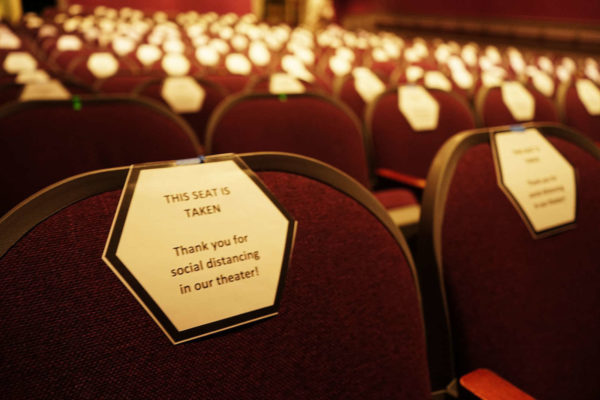 It wasn’t an ordinary performance at the Little Theatre of Alexandria (LTA), but on Friday, September 11, the doors opened for a memorable evening of drama at a distance.

“I was anxious before I came to the theater, but everything is so well managed,” said Mary Hutzler. “It was an interesting experience. I thought the play was very powerful and I really felt engaged.”

The theater’s first show back, “Love Letters” by A.R. Gurney, was well chosen for the times. Only 40 people were allowed in the show, everyone (except the actors) wore face masks and couldn’t get up during the performance, which featured real-life married couple Nicky and Steve McDonnell reading fictional love letters to each other seated at opposite ends of the stage.

“LTA did a really smart job in planning it,” Nicky McDonnell said after the show. “We’re married, so we didn’t have to socially distance from each other.”

The couple met in New York 27 years ago, and throughout diverse acting careers that span decades never worked together until this production. Rehearsals were conducted with the director via Zoom.

“They need to connect (with the audience),” Director Joanna Henry said. “They do it brilliantly.”

The show runs until September 27. The next show, “Mixed Doubles” by LTA member Rick Lore, will run from October 2-18; followed by “Belle of Amherst” by William Luce from November 6-22; and the season will end with a COVID-friendly version of “A Christmas Carol” from November 28-December 19.