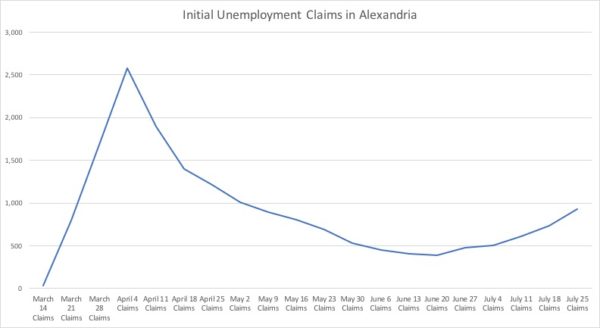 The number of new unemployment claims in Alexandria has reached levels not seen since early May, according to the Virginia Employment Commission.

The latest numbers show that the number of new unemployment claims — those making their initial unemployment filings — has gone up to 932 for the week of July 25. Between July 18 and July 25, claims increased by 201.

The number of new initial filings has been steadily increasing since June 20, when it hit a low of 386 new claims. 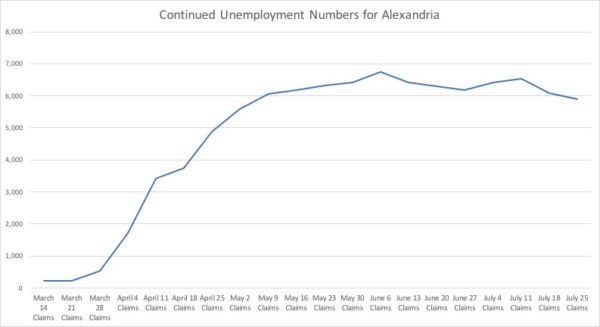 While initial claims have gone up, the number of continued claims have held steady or gone down. For the week of July 25, there were 5,904 new claims, the lowest claims have been since May 2.

The third phase of reopening at the beginning of July appears to have done little to impact unemployment in the area. Alexandria’s numbers are also part of a statewide surge in new unemployment claims.

“The Virginia Employment Commission (VEC) announced that the total number of initial claims filed from the beginning of the pandemic in Mid-March of 2020 through the July 25, 2020 filing week was more than double the average number filed during the last three economic recessions,” VEC said. “For the filing week ending July 25, the figure for seasonally unadjusted initial claims in Virginia was 42,966. The latest claims figure was an increase of 5,020 claimants from the previous week and rose to its highest level since May.”