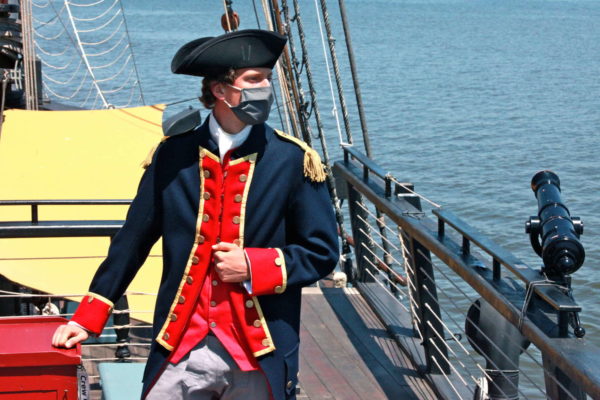 Ever wonder what it feels like to sail around the Potomac River in a sloop of war? The Tall Ship Providence, which is a replica of the first naval warship commissioned by the Continental Congress in 1775, is open to the public for tours and cruises.

Tall Ship officially opened to the public over the July 4 weekend, and it was a fitting opening date for the 110-foot, 12 gun sloop of war. The replica, which was unveiled in time for the 1976 Bicentennial, is almost exactly like the original Providence, with the exception of an engine, electricity and some air conditioning in the Captain’s quarters.

Once on the ship, visitors will meet commanding officer Captain John Paul Jones (actor Jeremy Lawrence, who never breaks character), who will provide them with a tour of the ship and talk about how cramped life could be on such a small vessel with more than 70 other sailors. The sleeping arrangements, for instance, are uncomfortably close, as the galley was completely filled with hammocks.

“Indeed, that is a lot of men for a ship this size,” Jones said in a Scottish brogue. “But we must carry that many men so we can carry prize crews. Whenever we take a ship, we have to send sailors over to sail her into the nearest friendly port.” 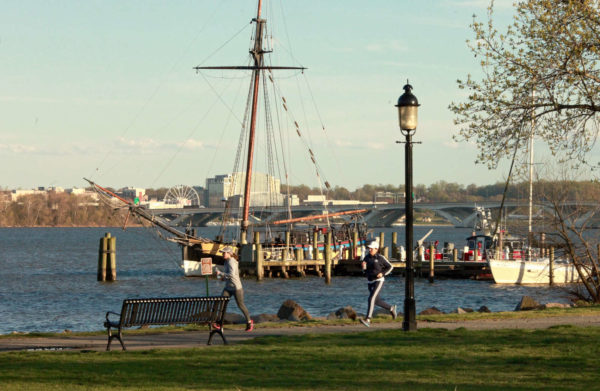 The original Providence was destroyed to keep it from falling into the hands of the British in 1779, but throughout its tenure broke through a British naval blockade at Newport, captured 16 enemy ships and disrupted the fishing industry in Nova Scotia, which was a British food source.

The ship, which is sailed by a professional crew of five, has graced the Alexandria waterfront since arriving last summer. It took a little under a year to get U.S. Coast Guard and other inspections finished to ensure that the vessel was shipshape and ready to receive visitors.

Two hour-and-a-half-long cruises are currently available on Fridays and Saturdays from 4:30 to 6 p.m. and then from 6 to 7:30 p.m. The latter cruise includes beer and wine and light snacks.

“If all those sell out, we will then open up on Sunday and Thursday for cruises,” Clair Sassin, executive director of the Tall Ship Providence Foundation, told ALXnow. “In terms of charters, we’re open any day for a charter.”

The Tall Ship Providence Foundation also operates a visitor center and gift shop at One Cameron Street — underneath the Chart House Restaurant. The ship is ALX Promise certified, and the crew disinfects it after each voyage.

History lovers also can tune in every Tuesday with #TallShipTuesdays, which include stories from Jones and historical interpreters.

Schedule a walk-through of the luxury townhome community at Darden Towns in the heart of Del Ray.

With the City of Alexandria returning to regulating on-street retail and restaurant uses, including adding a price tag for the benefit, the City Council is also scheduled to review a…

It’s been a rough week for Washington Metropolitan Area Transit Authority (WMATA), and to top things off: someone hit a Metro work vehicle in the Braddock neighborhood this afternoon. The…

The City of Alexandria said a survey collecting feedback on the new expanded King Street pedestrian zone showed overwhelmingly positive. After the 100 block of King Street was permanently converted…

END_OF_DOCUMENT_TOKEN_TO_BE_REPLACED

More Stories
Ask McEnearney: How Did the Real Estate Market for the First Half of 2020 Compare to 2019?Stately Lionhead Rabbit ‘Mr. Patterson’ Seeks Dignified Home