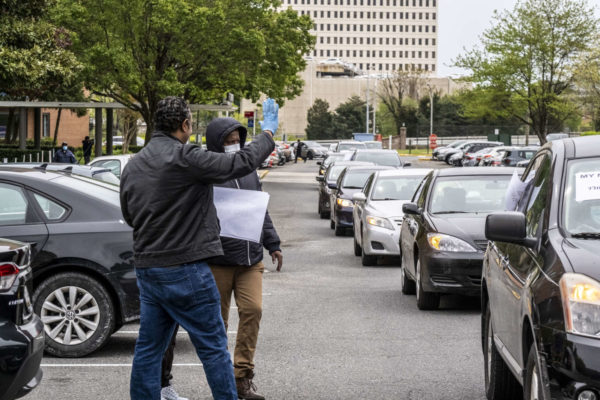 There are a number of planned demonstrations against police brutality and racism this week in Alexandria, including one tomorrow that had originally been a protest against rent.

The planned protest for rent cancellation at Southern Towers has been realigned to focus on longstanding racial inequity issues being protested nationwide.

“The planned action was originally focused on rent cancellation, as well as bringing demands of extended unemployment pay and health care to the Capitol,” said Sarah Jacobson, lead organizer with UNITE HERE Local 23. “Tomorrow’s action reflects the national outrage at the deaths of George Floyd, Tony McDade, David McAtee and James Scurlock and too many other Black people killed at the hands of police.”

The caravan protest follows earlier protests in favor of canceling rent for residents during the pandemic.

The city is also scheduled to hold a town hall tonight (Tuesday) from 7-8:30 p.m.

“The town hall, ‘Facing Racism. Demanding Change.’ will honor Floyd, and provide an opportunity for residents to share their voices,” the city said in a press release. “The event will feature a panel of civic leaders, including Living Legend and Activist Joyce Rawlings; Councilman John Taylor Chapman; Alexandria City Public Schools Superintendent Dr. Gregory C. Hutchings Jr.; and Alexandria youth leader Kamryn Powell. The panel will be moderated by the City’s Race and Social Equity Officer, Jaqueline Tucker. Community breakout sessions will be held during the town hall to address next steps.”

Another program called NoVa Vigils to #EndWhiteSilence is scheduled tonight at 6 p.m. outside the Alexandria Police Station at 3600 Wheeler Avenue.

“Demonstrators bringing signs and practicing social distancing will be at two police headquarters in Alexandria and Fairfax County to hold vigils marking a week of action to end white silence,” said the organizers, Showing Up for Racial Justice Northern Virginia. “The demonstration is to show that George Floyd’s and Breonna Taylor’s murderers were not just rogue cops, but they represent underlying conditions of racist policing that manifest here in northern Virginia as well, as they did in the case of Natasha McKenna.”