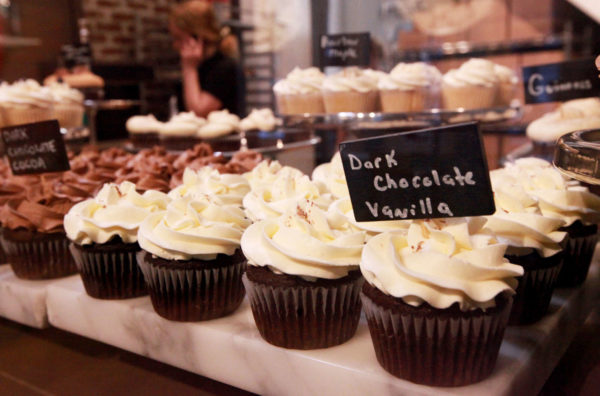 (Updated on May 16 at 12:00 p.m.) The director of Feed the Fight Alexandria was picking up 300 cupcakes from Alexandria Cupcake to donate to three Inova hospitals on May 6, when she found an unexpected surprise waiting on her windshield — a $40 parking ticket.

The ticket was later paid for by an Alexandria Police officer.

Whitley said she was parked outside Alexandria Cupcake at 1022 King Street in Old Town with the rear trunk door of her SUV left open, and was inside picking up the cupcakes for National Nurses Day.

“There were 3-4 large white bags in there as I was carrying bags filled with 25 cupcakes per bag into the car. I had 300 cupcakes to pick up to deliver to 3 INOVA hospitals for National Nurse’s Day,” Whitley wrote. “While I realized there was no parking on that side of the street, I was loading the car and there were NO other cars on King Street that morning. (ZERO!) I had my hazards on, and the parking police saw me walking back and forth loading the bags. I WAS STILL GIVEN A $40 ticket. I was shocked.”

Whitley added, “In the last 5 weeks, we have delivered over 4,000 meals to the frontline heroes in Alexandria. I am not asking for a pat on the back or a trophy, but what I am asking for is that this ticket be rescinded. I am asking Justin Wilson to speak with the Old Town Parking Enforcement officials who clearly made a rude call. Can I afford to pay the ticket, yes…Should I get a break, YES!!”

As Mayor, however, Wilson legally has no ability to direct staff to do anything. The city manager is the individual who runs the government, while the mayor and council direct the city manager with their votes and requests at various official council meetings and work sessions.

“Ali De Jongh Whitley, thanks for the important work that you are doing,” Wilson wrote Whitley in response. “I do not have the authority to cancel tickets, but if you drop me a line ([email protected]), I can help you navigate the process to contest the ticket.”

Whitley responded by saying that being given a ticket was wrong.

“Thank you for your prompt response. I will reach out to you,” she wrote. “We have been trying to keep the restaurants in… Alexandria afloat by supporting local and donating local to our INOVA partners. Most of the time, the restaurants deliver for me, but we had to deliver to 3 separate hospitals that day, and it was impossible. I have such a bad taste in my mouth about the whole episode that I could no longer stew about it at home. It was wrong.”

When ALXnow spoke with Whitley, she said that the ticket had been paid for anonymously.

“I don’t know who paid for it,” Whitley said, and joked that “except for parking enforcement,” her organization wants to partner with the fire department and other city departments with uniformed officers.

It turned out later that the ticket was paid for by an Alexandria Police officer. One of the residents monitoring the Facebook page asked City Attorney Joanna Anderson for help on the issue.

“She looked into it and felt she could not legally intervene but got the word out and one of the police officers, Captain Fard took it upon himself to pay the ticket because his wife is a nurse and he wanted to thank Ali for her caring kindness!” resident Baraba Beach wrote. “So although I don’t believe a ticket should have been legally or morally issued in the first place, I do want to recognize the City staff who tried to right a wrong. Thank you again Ali and am so very sorry this happened to you!”