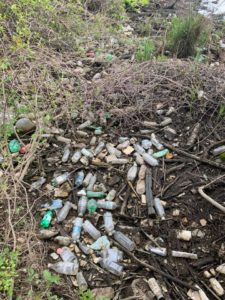 One attempted solution to a trash problem in Alexandria has allegedly created another, though the city said it’s working to manage the problem.

In response to the increased demand for recycling services at homes in Alexandria, the city has been encouraging residents to take their surplus recycling materials to a facility at 4251 Eisenhower Ave.

A local duo calling themselves Advocates for Clean & Clear Waterways cleaned 110 trash bags from Hunting Creek and said they identified the source of the pollution as the Alexandria Recycling Center. Video taken at the site shows holes in the fence through which trash was being dumped down the hill.

The Video showed the hillside littered with trash bags, styrofoam and more.

“Unfortunately, this is where our pollution is coming from,” said Caleb Merendino, who along with Benjamin Swanson runs Advocates for Clean & Clear Waterways. “Everything upstream from this point is pretty clean… [but] from the recycling center down we’re seeing the reason that our waterways are so polluted.”

Merendino said part of the problem was the lack of trash can at the recycling center, leaving residents dropping off trash to find alternative means of disposal. The other problem was large holes in the fence where those residents stuffed their trash through.

“Alexandria, what the heck is going on?” Meredino said. “We’re at a recycling center. You’re trying to pretend, but I don’t see any results. We have a broken fence. You are the reason our waterways are polluted… Alexandria is to blame, and everyone should be furious.”

“Virginia DEQ and the City of Alexandria have been promptly notified, and Alexandria is to blame for much of the garbage flowing into our local waterways,” said Swanson.

City of Alexandria spokesman Craig Fifer said the damage to fences was found and repairs were made immediately, but pushed back on the characterization of the recycling center as the source of the pollution.

“We also inspected the area around the fence, and we are confident that the facility is not a major source of pollution in waterways,” Fifer said. “The waterway near the Eisenhower Avenue facility is the main stem of Cameron Run, but the residents who shot the video generally collect trash from the downstream tidal portion of Cameron Run called Hunting Creek. Hunting Creek receives surges of water (and debris) from the entire Potomac River watershed with changes in the tide. This means trash found in the Potomac River and Hunting Creek is generally from upstream of Alexandria. The recycling drop-off facility and surrounding area is not a significant source of trash in Hunting Creek, but its location upstream from Hunting Creek may create that appearance.”

Fifer said like other localities in the region, the city is trying to figure out how to handle the 30% increase in volume of trash and recycling since the pandemic started.

“Because we have had to limit curbside collection to the contents of the City-provided bins (i.e. no loose or bagged trash on the curb) and suspend collection of bulk, metal and yard waste, our drop-off facilities have also had large increases in volume,” Fifer said. “In particular, we’re seeing a significant increase in cardboard shipping boxes and food takeout containers because people are shopping more from home.”

Fifer added, “These materials take up more volume in trash and recycling than other items, filling bins faster. Compounding these challenges, we are seeing a significant increase in illegal dumping at our recycling drop-off centers, both of non-recyclables and of items while the centers are closed. All this is why there is much more litter on the pavement at drop-off centers now than a few weeks ago.”

Fifer said additional resources have been directed to the recycling drop-off facilities, including cleaning the facility five days per week.

Photo via Advocates for Clean and Clear Waterways/Facebook