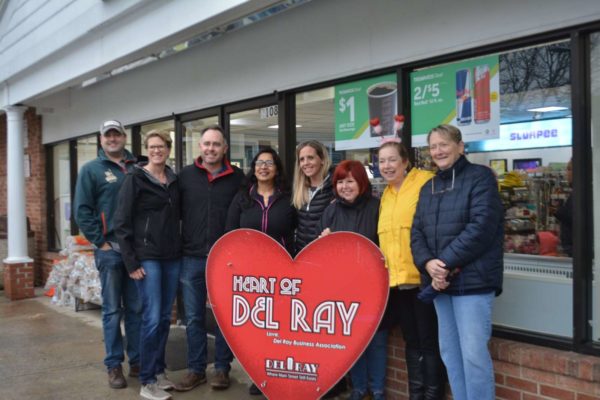 Preeti Patel and her 7-Eleven at 2108 Mount Vernon Ave. have won the heart of Del Ray — literally.

Last week, members of the Del Ray Business Association presented Patel with the 2020 Heart of Del Ray award. The annual award was presented after Patel’s business received the most votes from the community, and the 7-Eleven overtook Lena’s Wood-Fired Pizza & Tap, Rock of Ages Music, Stomping Ground and Studio Body Logic.

“I really didn’t expect to win the award because of all the other nominees,” Patel told ALXnow. “Even though I’m not from here, the neighborhood is very supportive.” 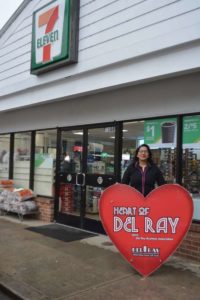 The award represents the business that not only received the most votes, but exemplifies the community’s spirit. The DRBA also presented Affordable Signs & Banners with the Forever Heart of Del Ray award for creating years worth of banners and signs for the community.

“Del Ray is known for its mom-and-pops, so this is why this year’s award is unusual, because it’s going to a 7-Eleven. But it means more than that for the Del Ray community,” Reuter said. “There’s never been a time when we have an event that she hasn’t asked, ‘How can we help?'”

Patel, a native of Gujarat, India, moved to the U.S. 20 years ago. She grew up working in her father’s pharmacy, and worked as a mail carrier for the U.S. Postal Service before pulling up stakes in New Jersey and moving to Alexandria with her two young sons. She bought the 7-Eleven tens years ago, and it keeps her busy enough that she has no interest in owning another.

“After 10 years, it’s incredible to see customers and I’ll ask, ‘How is your son?’ and they say, ‘Oh, he’s in college now,’ and I remember when they were in here buying him a lollipop,” she said. “I’m very happy to be here in such a nice neighborhood.”