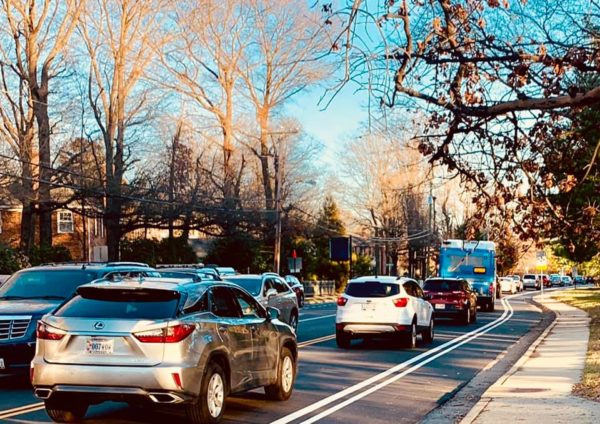 After months of pressure from an extremely vocal group of city residents on Facebook, council members peppered staff with questions about the road diet — a reduction of a 0.9 mile stretch of Seminary Road between N. Quaker Lane and Howard Street from four to two lanes, plus the addition of bike lanes on both sides, a center turn lane, crosswalks and medians.

The city’s most recent traffic data shows a travel time increase of one minute for vehicles going westbound on Seminary from Quaker Lane to Jordan Street at peak travel times (8:15 a.m. and 5:15 p.m.) and a 30 second increase in the opposite direction. The data was collected with the city’s Bluetooth travel time monitoring system. On the plus side, staff said, the road is now otherwise safer for pedestrians, cyclists and drivers.

Alexandria City Councilwoman Amy Jackson called for a reversal of the road diet in December and spent more than an hour questioning city staff on Tuesday night. During her questioning, she had an aide present a slideshow of photos of traffic along Seminary Road.

“Hundreds of people took hundreds of pictures, because that’s what they’re doing because they’re sitting there,” she said. “I’m not convinced that our city government has alleviated the fears (of the public).”

City transportation planners said that the roadway might be minimally slower for drivers during peak hours, but that it is safer for pedestrians and cyclists.

“For the vast majority of the day the road is performing the same, if not better than before,” said Hillary Orr, deputy director of the city’s department of Transportation and Environmental Services. “And for those other 23 hours, it’s designed in a way that is comfortable for people who are walking, biking, using transit and driving their cars. And that’s one of the tradeoffs that we have talked about throughout this process.”

Fire Chief Corey Smedley told council that his staff was in communication with city staff as the road diet was being planned, and that fire and emergency vehicles have been un-hindered in their ability to navigate through traffic and answer service calls — assertions that run counter to the beliefs of road diet opponents, who have cited a FOIAed trove of emails as proof that fire department brass were pressured into supporting the changes.

When Jackson asked him if his department was in consultation and agreement with the plan, he responded by saying, “Absolutely.”

Police Chief Michael Brown reported that there have been three reported car crashes along the roadway since the road diet was implemented last fall, including one that occurred at the conclusion of a high speed chase by the Virginia State Police. Otherwise, he said, the road diet has presented no issues for police.

Bill Rossello wasn’t convinced by the staff presentation. The Seminary Hill resident sat in on the meeting for more than two hours before calling it a night and walking out.

“It’s absolute horse hockey,” Rossello told ALXnow. “The city is not very good at presenting data, gathering data and what it’s really not good at is listening to the overwhelming majority of community members who actually use the road, who see it first-hand, live it every day. Not a bit.”

Wilson said he expects community activism regarding the road diet to continue.

“There are going to be differences of opinion, there are going to be things that we don’t always 100% see eye-to-eye on,” Wilson said. “I appreciate the collaboration on this and so many other matters. I want to thank the community for all of their comments on this. I’m sure they will continue, and that’s a great thing and we can continue this discussion as we move forward and evaluate this project as we committed to do from the beginning.”

But Rossello, who is an administrator of the Alexandria Residents Against the Seminary Road Diet Facebook group, said Tuesday night’s meeting didn’t sit well with him.

“What we’re seeing at the leadership levels is that there seems to be a willingness to go along with this narrative that we were all involved talking about this throughout the process, which is absolutely not true,” he said. “They know that there are more cars on the road, and narrowing roads isn’t gonna make it better. That doesn’t make our quality of life better. I don’t think anything that happened tonight increases the trust that the community has in our city government.”

Photo via Alexandria Residents Against The Seminary Road Diet/Facebook

Tabletop gaming shop coming to Old Town North — “Large ‘Coming Soon!’ signs are up in the windows of a store at the corner of Wythe and North Washington streets —…

A last-minute disagreement between city staff and developers of a new development in Carlyle raised concerns about fairness in the city’s development process. There was little indication before the City…

Alexandria Hyundai has been taking up space on three blocks of Mount Vernon Avenue for 21 years, and owner Kevin Reilly is submitting a plan to be able to stay…

Bonaventure has released its second concept design for its mixed use shopping center proposal for 2525 Mount Vernon Avenue in the middle of Del Ray. Bonaventure made a few big…