Post Content
Search
News
The intersection of Duke Street and Cameron Station Blvd., where an 89-year-old man was struck by a vehicle and killed on Jan. 26, 2020. (Staff photo by James Cullum)
Previous Image 1/2 Next Image

(Updated at 12:20 p.m.) The vehicle that struck and killed 89-year-old artist Alfredo DaSilva on Duke Street on Sunday morning, Jan. 26, was a Carpenter’s Shelter shuttle van, ALXnow has learned.

DaSilva was hit by the shelter’s daily shuttle van after it dropped off guests of its winter and day programs. Carpenter’s Shelter is located at Landmark Mall, in the former Macy’s department store, about a mile from the scene of the crash.

The incident occurred just before 8 a.m. as DaSilva crossed Duke Street at the intersection of Cameron Station Blvd.

Carpenter’s Shelter operates a daily shuttle which serves the guests of our Winter Shelter and David’s Place programs. We have been informed that — after all guests had been transported on Sunday morning January 26, 2020 — the shuttle vehicle was involved in a serious accident in the City of Alexandria. As of now, we have been given no further details pending the outcome of the investigation currently underway by law enforcement authorities.  We are and will continue cooperating fully with law enforcement throughout the duration of the investigation. We are deeply concerned for all involved, and will communicate further details to the Carpenter’s Shelter community as soon as they are available.

The driver of the vehicle is a Carpenter’s Shelter staff member. The driver called the police, stayed at the scene after the incident and was released without charges. 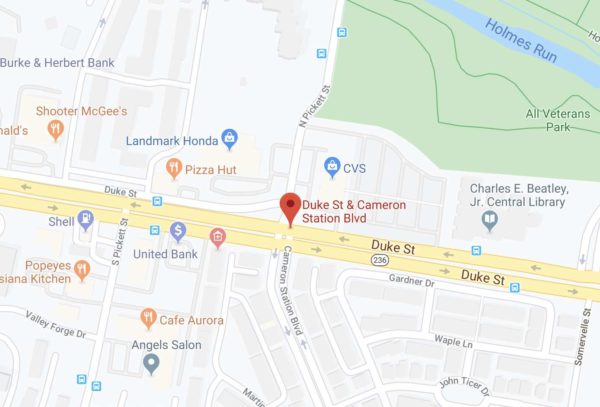 Map and photo via Google Maps

END_OF_DOCUMENT_TOKEN_TO_BE_REPLACED

More Stories
ACPS: No Affordable Housing at MacArthur, But Housing Will Be Considered at Other SchoolsMorning Notes