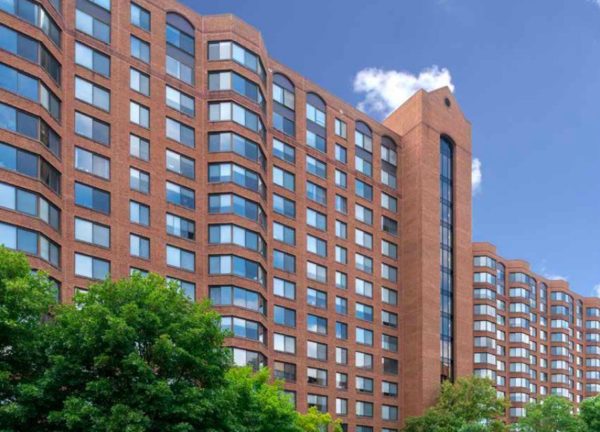 (Updated at 2:25 p.m.) Alexandria is hoping to buy an apartment complex in the West End to maintain it as affordable housing.

The City Council is scheduled to consider a $8 million loan to the Alexandria Housing Development Corporation (AHDC), an affordable housing non-profit established by the city in 2004, at a meeting tonight (Tuesday).

AHDC is hoping to buy The Avana Alexandria (3001 Park Center Drive), a 326 unit apartment split between one-bedroom and two-bedroom units. The building also features amenities like a pool and tennis court. The actual cost of the acquisition is currently confidential, according to AHDC, pending closing.

Mayor Justin Wilson tweeted that the purchase would be the city’s first use of affordable housing funding connected to Amazon’s HQ2.

Tonight, Council will be considering whether to extend affordable housing financing to support the preservation of 326 units.

The Avana Alexandria was built in 1989 and, unlike many newer apartments in the area, is comprised entirely of market-rate units, meaning there is no existing requirement for units to remain affordable.

The loan to the AHDC would allow the agency to take over units once current occupants leave, and they will then be rented at affordable rates to income-eligible households.

Two-bedroom units run from $1,972-2,415, but would be set at $1,638 for affordable units and $2,184 for workforce units. Other subsidies would help keep utility payments adjusted for lower incomes for roughly five years.

Funding for the workforce housing would come from developer JBG Smith.

AHDC stated in documents sent to the City Council that the building offers flexibility for temporary relocation for people in housing slated for upcoming redevelopment.