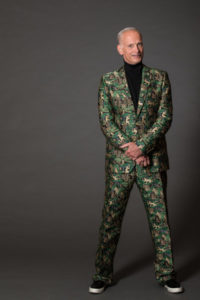 Transgressive cult film director John Waters is coming back to Alexandria next week.

On Wednesday, Dec. 18, Waters is scheduled to return to the Birchmere (3701 Mount Vernon Avenue) for an event titled “A John Waters Christmas: Filthier & Merrier 2019 Tour” with the tagline “It’ll Stuff Your Turkey.”

It’s very much in keeping with the filmmaker, director, actor, writer and artist whose films like Pink Flamingos were advertised as “an exercise in poor taste.” Waters is perhaps most famous for his 1988 comedy Hairspray.

What exactly occurs at the John Waters Christmas event is unclear, with very vague descriptions at the Birchmere site and other locations on the tour. Past Christmas performances have mainly been stand-up comedy focused, but Waters released a Christmas album in 2004 so there’s at least some background in Christmas music.

Here’s the description of a sold-out John Waters Christmas performance in New York City next Monday:

Like a damaged St. Nick for the Christmas corrupted, John Waters – legendary filmmaker (“Female Trouble”, “Hairspray”, “Serial Mom”), raconteur and author of bestselling books, Carsick, Role Models and Make Trouble – hitchhikes into town with a bag full of sticks and stones for the devoted and the damned, spreading Yuletide profanity and perverted piety with his critically acclaimed one-man show, “A John Waters Christmas – Filthier & Merrier.” This rapid-fire “trigger warning” for holiday traditionalists asks the questions, “Is Prancer the only gay reindeer?”, “Is it wrong to steal purses from cars in graveyard parking lots on Christmas Eve while mourners leave flowers?”, “Has Santa ever been nude?”, and, most importantly, “Should you disrupt living crèche celebrations this year in the name of political action?” Miracles really do happen at Yuletide, even if they’re false, and Waters prays for a Gaspar Noé Christmas film, and a new sex club that encourages gay men and lesbians to have sex with each other for the very first time. Delving into his love for the annual December warning list of “Unsafe Toys to Give Your Child” and his hatred for email Christmas cards, The Easter Bunny, and any kind of holiday “food issues”, the Pope of Trash will give you a Cool Yule like no other – It’ll Stuff Your turkey. You better watch out, you better cry! John Waters, the People’s Pervert, is coming to town.

Rogers has been bringing his one-man Christmas special to the Birchmere for years. In 2014 he told the Washington Post that the annual tradition has made him “like a drag queen on Halloween; I’m working this Christmas.”

Photo via The Birchmere