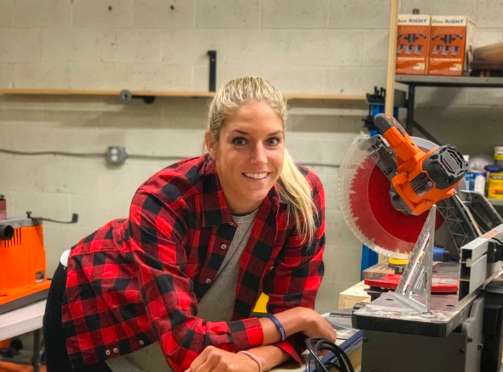 (Updated 4/5/21) Elena Delle Donne from the Washington Mystics has had two big wins this year.

The team won the WNBA championship last night (Thursday), but earlier this summer Delle Donne won city approval to bump the fence of her Old Town home further into the public right of way.

The connection was noted by Mayor Justin Wilson on Twitter, with some tongue-in-cheek speculation that the two could be related.

In July City Council unanimously approved an encroachment for @De11eDonne and tonight she led the @WashMystics to their first WNBA Championship!

Congrats to Alexandria resident Elena and the rest of the champions!

The home sits on Old Town. But the question of encroachment also spurred discussion of how the city approaches encroachments into the public right-of-way — meaning additions to a home that may extend into the nearby sidewalk.

Councilwoman Redella “Del” Pepper said the reservation of these properties as part of the public right-of-way dated back to Dayton Cook, a transportation and environmental services director, who she said reserved small parcels across the city for eventual public use that never came about.

“[These were set aside] in the hopes that in the future we might want to do x, y or z,” said Pepper. “Well, you know, this is the future, so I have no problem with it.”

Staff noted that the idea behind preserving the right-of-way on this property was potential for future sidewalk widening and tree wells, but the City Council noted that no such additions were currently planned. Still, Wilson said the city should find a better way of approaching encroachment issues.

“We’ve had a number of these cases where, as you know, I’m struggling to come up with a uniform way of approaching these,” said Wilson.

City staff said they were looking to make revisions to encroachment issues, including taking fence and wall encroachment to an administrative level so they would not need to come before public hearings, except in certain circumstances.

As for Delle Donne, she and the WNBA champion Mystics will be celebrating their win in D.C. this afternoon.

Photo via City of Alexandria. Hat tip to CarFreeHQ2.