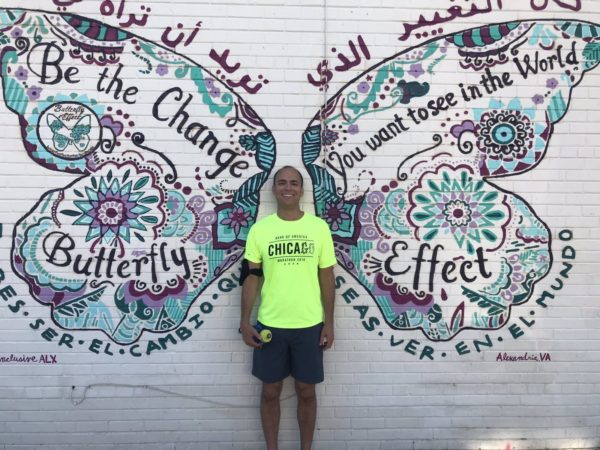 An Old Town mural has helped raise some $10,000 for a mix of local and national charities.

The mural of two butterfly wings on the side of lingerie shop Bloomers (924 King Street) was the center of a local social media fundraising campaign in August and September. Last week, organizers announced it helped to raise $10,200 for 111 nonprofits.

California-based artist Tasha Wahl painted and designed the mural, while an anonymous donor helped fund the project through ACT for Alexandria.

The project was a result of a partnership between Vice Mayor Elizabeth Bennett-Parker, Tasha Wahl, ACT for Alexandria, Asana Partners, and Bloomers. More than 400 individuals participated in the campaign. Two nonprofits were honored with $1,200 in donations and prizes as a result of the generosity of the community. The Alexandria Police Foundation received the social media prize [for] the most posts on social media. The Animal Welfare League of Alexandria received the most photo submissions.

To participate, individuals were encouraged to take a photo in front of the butterfly wings mural located at 924 King Street, Alexandria, VA and select the charity of their choice from a list of almost 250 local and national 501c3 organizations to receive a $20 donation. Participants could also post their photo on social media tagging their favorite nonprofit, #inclusiveALX and #butterflyeffect for a chance to win an additional $500 for their favorite group.

“I’m thankful to Tasha Wahl for her vision in starting this global project and for choosing Alexandria; to Asana Partners and Bloomers for providing the space for the mural; and to the members of the community who brought it to life,” Vice Mayor Elizabeth Bennett-Parker said.

The awards were funded by Ms. Wahl and an anonymous donor through ACT for Alexandria, the community foundation. Working with Vice Mayor Bennett-Parker, Ms. Wahl customized the mural for our community to include the phrase, “Be the Change You Want to See in the World” in English, Spanish and Arabic.

Mayor Justin Wilson was among those who posed in front of the artwork in August.

We interrupted our run this morning to pose at my colleague @ElizabethForALX ‘s mural in Old Town. #InclusiveALX #butterflyeffect pic.twitter.com/Ca0IwgmPO8

The “Butterfly Effect” hashtag is a reference to a movement of mural-fundraisers started by Wahl in 2013 that combined her interpretation of Mahatma Gandhi’s concept of setting an example for change, and Edward Lorenz’s “Butterfly Effect” theory of small actions producing chain reactions to major changes.

Alexandria Vice Mayor Elizabeth Bennett-Parker first saw the project via Instagram, per a post on her website, and applied to host one of Wahl’s murals but with multilingual translations of “Be the Change you Want to See In the World” and #InclusiveALX hashtag

“I’m excited to bring the Butterfly Effect to Alexandria because it will build community, promote vibrancy on upper King Street, and highlight nonprofits in a fun, interactive way,” Bennett-Parker told Alexandria Living Magazine when the mural launched last month.

In a statement last week, she thanked Wahl and Asana Partners and Bloomers, and those who voted and “brought it to life.”