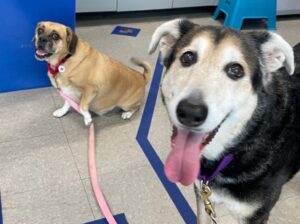 Dynamic duo Chloe and Aggie are best friends, and the Animal Welfare League of Alexandria is giving the pair up for adoption.

Aggie, a 10-year-old hound mix, has been with four-year-old pub mix Chloe her entire life.

“Both and are best friends who traveled all the way from Florida to find their new family,” AWLA spokesperson Gina Hardter told ALXnow. “Chloe and Aggie spent some time at the AWLA’s summer camp this week and had a blast hanging out with the campers.  They think it would be equally fun to have children in their future home as well.”

Learn more about meeting Aggie and Chloe by visiting AlexandriaAnimals.org/Adopt-By-Appointment.