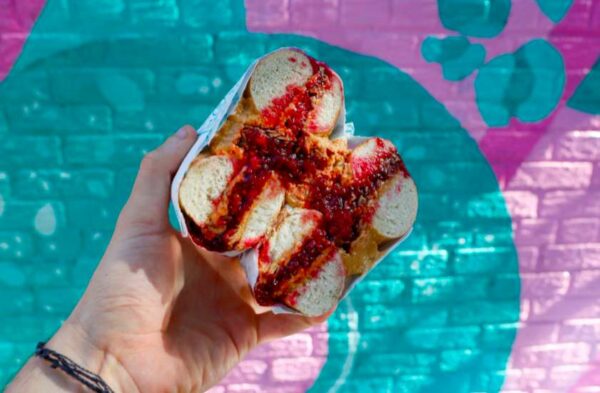 The D.C.-based Call Your Mother Deli chain is expanding to Old Town, as first reported by the Washington Business Journal.

The company, which was founded in 2018, reportedly signed a lease at the 4,500-square-foot building at 128 N. Pitt Street, and is looking for electrical contractors. The 1940s-era building has been vacant for two years since Helen Olivia Floral Design moved to Del Ray.

Call Your Mother, a self-described “Jew-ish” deli specializes in making in-house bagel sandwiches, doughnuts, latkes and other deli favorites. Food and Wine Magazine even listed it as one of 14 new names to know in a 2019 Best Jewish Delis in America article.

The deli is owned by chefs Daniela Moreira and Andrew Dana, as well as Jeff Zients, a management consultant who is the Biden administration’s COVID-19 coordinator. No company representatives returned ALXnow’s calls for comment.

The company, which also owns Timber Pizza, Turu’s Pizza, Mercy Me, and Ballston Service Station, started out in farmers’ markets in D.C. The Old Town location will be the fifth brick and mortar in the Metro area.