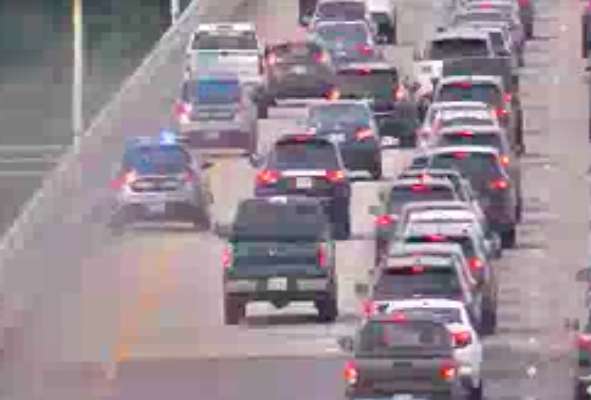 Virginia State Police briefly chased a suspect driving a white U-Haul pickup along Mount Vernon Avenue in Arlandria. The suspect was chased from Arlington and into Alexandria before turning onto West Glebe Road and taking out a road sign at around 4:15 p.m.

The U-Haul truck drove on the wrong way of the street on West Glebe Road, and nearly struck a VSP cruiser. The suspect veered out of the way and struck a road sign, which was knocked into the middle of the street, and has since been cleared away.

“His vehicle got damaged,” the investigating officer said via dispatch. “Pretty heavy damage… His vehicle nearly struck my cruiser.”

The truck was then involved in a crash with two trucks on northbound 395 on the 14th Street Bridge as it drove into D.C.

Alexandria Police were not notified of the incident and are not coordinating with VSP. ALXnow has also reached out to VSP for an update.

Virginia State Police just chased a U-Haul pickup truck from Arlington into Alexandria on Mt. Vernon Ave, then back into Arlington and finally into D.C. via I-395 pic.twitter.com/VWvULlvpli

Video of a @VSPPIO rush hour chase 20-mins. ago on I-395N through Arlington into DC where VSP lost the truck. At least 1 other vehicle & street sign hit. Speeds at times in excess of 100mph. @ARLnowDOTcom @dclinenews @WTOPtraffic @hhowardWTOP #police #traffic @TomJackmanWP pic.twitter.com/URTOrTTp1q