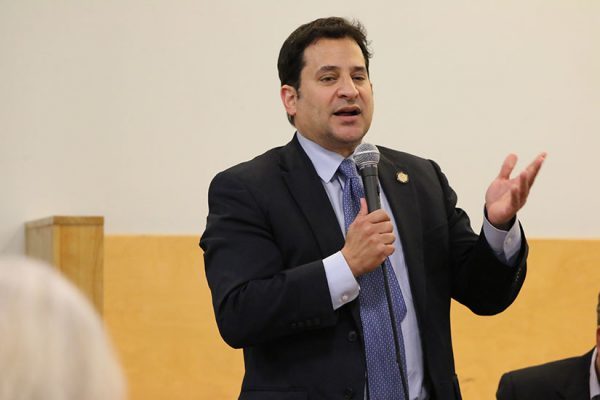 Virginia Lieutenant Governor candidate Del. Mark Levine has joined legislators in calling for the resignation of Republican State Senator Amanda Chase (R-Chesterfield) over her involvement with the Jan. 6 siege on the Capitol.

“She should resign,” Levine told ALXnow. “She is saying things that aren’t true and she’s inciting violence. She’s basically attacking the foundations of our democracy, and it really disappoints me because we work together. We had a good personal relationship. I’m just very disappointed in what she’s done.”

Chase attended the rally that preceded the riot but did not participate in the attack on the Capitol building.

Chase, who is seeking the Republican gubernatorial nomination, is accused of committing insurrection by the Senate Democratic Caucus and faces multiple calls for her resignation. Her Facebook account was briefly shut down after she said publicly in a video that the incident at the Capitol was the fault of Black Lives Matter and Antifa protestors, a claim that has since been disproven.

We’re not going to take this anymore. Get your popcorn folks and tune into the Senate tomorrow. I have a few surprises of my own. https://t.co/TxZTdYkwG3

Amanda Chase encouraged the Trump-led deadly insurrection against the United States. She is a stain on our Commonwealth. pic.twitter.com/kurtHYwlfe

Levine, 54, announced his intent to run for Lieutenant Governor last month, and if he loses the democratic primary says that he will run for reelection for the 45th District seat that he has held since 2015. His only opponent for the 45th is Alexandria Vice Mayor Elizabeth Bennett-Parker, who announced this week that she is running for the seat.

Levine said that Bennett-Parker did not call him about her entering the race for the 45th District.

“It’s not like the vice mayor called me and told me she was running. She didn’t,” Levine said. “I’m gonna run for lieutenant governor, because I think, frankly, what I’ve done for the 45th has been so positive that I think I can deliver for the entire state, the whole Commonwealth of Virginia, including Alexandria, Arlington, and Fairfax. But should I not prevail in the governor’s race, I think I’ve got a very good record to run for reelection as delegate, and obviously I hope to prevail.”