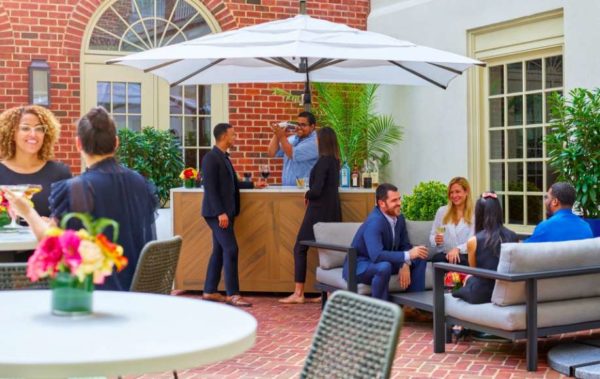 Old Town hotel The Alexandrian (480 King Street) is planning to kick off a new restaurant concept in the building’s central courtyard.

“Located in the heart of Old Town Alexandria near the waterfront on King Street, King & Rye offers seasonal Southern American cuisine made from scratch with the highest-quality regional ingredients,” the restaurant’s website said, “alongside the finest selection of whiskeys and bourbons.”

The menu features dishes like roast chicken with dumplings, gravy and squash, or trout with corn, peppers and an onion bisque. Main courses generally run around $20.

The alcohol selection includes a variety of beers, including several varieties of local favorite Port City, alongside the advertised whiskey.

King & Rye is scheduled to open on Wednesday, September 9.

END_OF_DOCUMENT_TOKEN_TO_BE_REPLACED

More Stories
Ask McEnearney: Using Bridge Financing to Purchase a Home Without Selling FirstKaraoke is Happening at Rock It Grill, But No Dancing